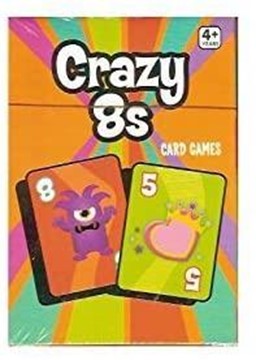 Description of how the game can be used to fit the categories: Crazy 8s is a challenging card game that can help players work on concentration. In order to succeed in the game, the players must concentrate on what cards the other players put on the discard pile so that they can determine what is the best card for them to put down. Attention span can be developed by playing this game because the player must pay attention to what is going on in the game in order to be able to figure out what cards they can get rid of. The player can work on attention span by trying to play so many rounds of the game without getting distracted or leaving the game. Visual scanning is incorporated into this game when the player scans their cards to see which card would be the best card to put on the pile. Cause and effect is involved in this game because when every player puts down a card, it affects the next player’s decision making and which card they will play. For example, if the player cannot match the card on the pile, it causes them to draw until they can play or play a crazy 8.