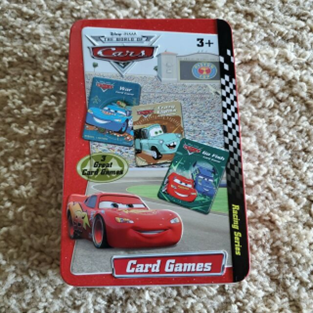 Description of how the game can be used to fit the categories: This fun card game pack incorporates three different card games. Go-Fish, Crazy 8s and War are all included in this Cars themed game box. For the games Go-Fish and Crazy 8s, the players must use problem solving skills and strategy to try to get rid of their cards. When a player asks another player if they have a card, they must strategize and go off of what they remember that player asking other people for to try to get matches to their card in Go-Fish. For Crazy 8s, the player also must strategize and see what one of their cards can match the card on the pile so they can discard a card. Sequencing is involved in War because the players must know the order of the deck so they can determine if they won the other card. In the other two games, sequencing is involved because each player must take an individual turn, and find a match for them. For Crazy 8s, the players must match the cards with either the number or color on the pile in that order to discard their card. Social skills are incorporated into all three games, but can really be practiced in Go-Fish. In this game, the players must ask each other if they have a specific card and then answer appropriately if they have the card or not. This is good practice for initiating and ending conversations appropriately. Cause and effect is incorporated in all three games. In War, if you flip the highest card, then you get to take the other person’s card. If you flip the lower card, then the other player gets your card. In Go-Fish and Crazy 8s, cause and effect is incorporated because if a player asks you if they have a card, it affects your personal deck and match making abilities. If a player puts down a card on the pile that matches a number but is a different suit, it affects your ability to match the card because the number may have changed.