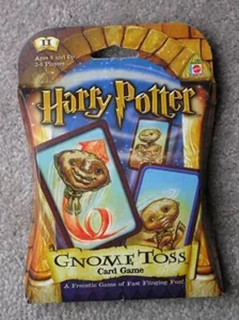 Description of how the game can be used to fit the categories: The Harry Potter Gnome Toss Card Game is a challenging game that keeps players on their toes. This game incorporates a lot of concentration because the players must always be focusing on where the arrow is pointing in the discard pile. The player can never lose focus on the game or they could have another player challenge them. Response speed is critical in this game because the players must flip their card from the deck of gnomes as quickly as they can and make sure none of the other players challenge them. Cause and effect is incorporated into this game because for every card that the players flip from the discard pile, there is a direction and color that causes another player to jump in. Visual perception skills are practiced in this game because the players must view the gnome card in the discard pile and then interpret which direction and color is on the card. This then instructs the next player to put their card on the pile.