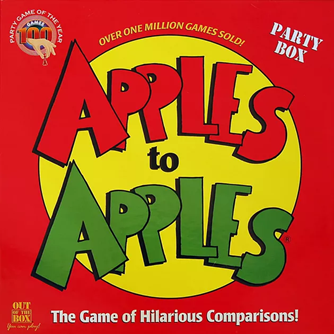 Description of how the game can be used to fit the categories: Apples to Apples is a fun and interactive game that can help players develop a variety of skills. Social skills are developed by playing this game because the players must take turns being the judge who announces the green apple card “topic” word. The judge also judges and reads all of the red cards that are put into the middle and determines which one they think is the best answer. This involves having conversations with the group as well as initiating thoughtful conversation that is on topic and directly relates to the game. Academics are incorporated into this game because all of the red cards have nouns or verbs on them, and all of the green cards have adjectives. This game could be used to teach about the difference between all of the parts of speech and practice correct usage. Problem solving is involved in this game because the players must determine which one of their cards best matches the green card in the middle. This also involves strategy because the player must decide which card will give them the best chance of winning. Response speed is important in this game because only the first 5 cards that are placed in the middle are counted as playable. If there is a smaller number of players, each player can put up to 2 cards in the pile but only the first 5 count to be judged. For larger games, each player can put one card in, but only the first 5 cards count to be judged as well.