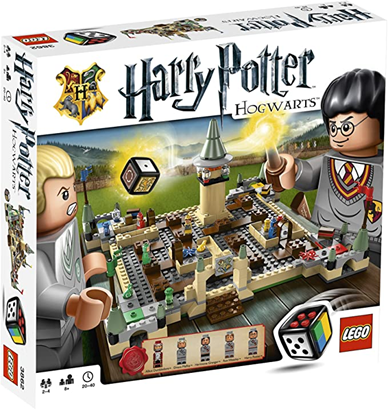 The game LEGO Harry Potter is a fun and interactive game that has two activities in one. Creativity and imagination are incorporated into this game as the players can build and set up the playing board as a game and activity in itself. The players can follow the directions or set up the game board in any way they want using the LEGOs. They can also move the walls and Potter characters during the game when they roll certain sides of the dice. Fine motor skills are incorporated into this activity when the players put the playing board together and when they move their characters and the board throughout the game. Crossing midline can be practiced while playing this game if the player reaches across their body when grabbing for LEGOs to set up the game piece or to move their character during the game. For example, to practice this, the player would reach for their LEGOs or game pieces with their left hand if they were on the right side of the board. Attention span can be worked on using this game by having the player first create what they want with the LEGO pieces so they can get out their own creativity, and then have them try to attend to the actual game aspect for a set amount of time.